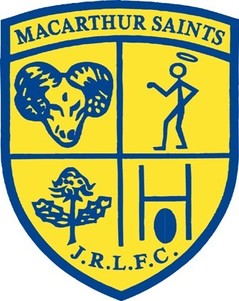 The club was formed in 1981 and was known as “St. Thomas More Junior Rugby League Football Club”. In our first year we had 66 registered players and entered four teams U/7’s, U/9’s, U/10’s and U/11’s in the Group 6 Northern Junior Rugby League competition. In our first year our U/7’s and U/11’s teams reached the preliminary finals. Our first committee consisted of six people five of these people were either coach or manager of one of the teams.

In 1982 we seen the introduction of Mini League for under U/6 and U/7 age groups. In the under U/6 competition we had two teams in the same division, the teams known as the U/6 Apples and U/6 Bananas played each other in the Grand Final for the St. Johns Minor Rugby League Trophy. We also   appointed our first patrons, Father Paul Ryan and Gordon Fetterplace. Our first weekly newsletter advising results of all games played each weekend was introduced. Hennessey’s News Agency in Macarthur Square became the clubs first major sponsor.

The competition became known as Newtown/Campbelltown JRLFC in 1984, we also had our first two ladies become managers for teams in the club (Judy Ferris & Lorraine Ginnelly) and we were given Worrell Park No 1 as our home ground for the season (our fourth ground in four seasons). The club purchased an old PMG (now Telstra) caravan which was fitted out and became our mobile canteen known as the yellow and blue bubble, our mum’s in the club loved it, much better than setting up the tent every canteen day.

In 1986 there were five players who achieved 100 games for the club.

In 1987 the competition became known as the Western Suburbs District Junior Rugby League.

The difficult decision was made in 1988 to move away from the school and become a different entity to enable a greater participation of players from the area.

In 1990 we finished 2nd in the district for the Saturday competition.

Macarthur Park (also known as Oswald Reserve) became our new home ground in 1994 as the club had out grown Thomas acres. We again came 2nd in the Saturday competition and 4th overall. The club also introduced our annual “Club person of the year award” Bob Dowd was our first recipient.

In 1995 the club had its first team in the Sunday competition with a U/16 side.

While our colours remained the same the club introduced a design change in our club jersey in 1996. We came 3rd in the Saturday completion and 3rd overall.

In 1999 we became Sunday Club Champions.

In the year 2000 we had our 20th Anniversary, we also purchased our first computer for the club as we entered the world of modern technology.

In 2001 five of the teams in our Saturday junior league competition were coached by players from our Sunday playing “A” grade team.

2002 was a big year where the club won four premierships, 3 junior and 1 senior with our “A” grade team winning the Sunday competition, with 11 boys making the Mini Magpie representative sides.

In 2005 the club had 21 teams, 303 players, of these teams 13 were semi- finalist, 9 were finalist, 7 teams made the grand finals, 3 winning the premiership and 4 finishing runners up, a great effort.

We were successful in having 4 boys selected for the Mini Magpie representative team in 2007.

In 2009 more success in the Mini magpies with 15 boys being selected.

In 2010 the club had another big year and celebrated its 30th anniversary.

2014 has been a challenging year with the club adopting the constitution proposed to all clubs in the Western Suburbs District JRLFC which now means that in 2015 our club will now be known as “Macarthur Saints Junior Rugby League Football Club Incorporated”. The club in 2015 will basically consist as a group of nine people known as the “Board” and will have a sub-committee selected by the Board.

In 2015 the club will celebrate its 35th Anniversary.  Mac Saints were also winners of its category in the Fishers Ghost march this year under Best Sporting Team.

The club changed our uniform slightly, in 2016, going with all blue shorts eliminating the previous yellow strip on the shorts.  For the first time in it's history Macarthur Saints also fielded its first all girls team made up of under 13 - 15 year old girls.  The end of the 2016 season saw three teams make it into the grandfinal with two of the teams, under 12's and under 16's, win premierships.

In 2017 our International teams joined the NSW combined conference competition playing against teams from other district all over Sydney. This new competition expanded the teams knowledge of the game and challenged the skills of the more senior players in our club.

​In 2018 we saw an increase in the number of younger players at the club and our under 10's team took out the first division premiership in a thrilling game at Wests Stadium.

In 2019 our club embraced a "retro" look jersey which was very popular with the players and supporters. The. culmination of the season saw 3 of our teams, the under 10's, under 12's and under 14's, all take to the field at Campbelltown Stadium to play in their age groups grand finals. The under 10's and Under 14's teams both walked away premiers in two of the most exciting games played all year.

In 2020 our club eagerly anticipates it's 40th anniversary celebrations, including a throw back jersey which is a replica of the original 1981 players kit.